I am an American guy married to a Swedish woman, with a son who is along for the ride in our adventures. I am now on "Pappa Leave" (Pappaledig) taking care of our son - traveling between Sweden and Hong Kong, and everywhere in-between. The hope with this blog is to simply share about my experiences if they are interesting enough that I think someone might care to read about them. Maybe people will have a good resource to look to when they are researching online. New fathers might feel a sense of relief knowing the crazy bits they go thru are shared. At the very least, hopefully the readers of this blog will be entertained.
Follow A Father on Pappa Leave on WordPress.com

The little guy is at an age now where he is not super happy with being fed baby food.  Actually, that is an understatement.  He WILL NOT eat anything unless we give him something to eat on his own.  This would indicate that it is time to move on from traditional puree’d baby foods, right?  Yes, of course, and we have largely done that – but there are times when he thinks he has eaten everything, but most of it is on the floor – so it is good to sneak a little puree’d baby food in there to make sure he is getting a real meal.  I do this by waiting for him to finish a bite of his own, and then give him a spoon of baby food.  We alternate and usually he is so focused on his next bite I don’t even think he knows that I am feeding him in-between bites.

I have found the world’s greatest thing for this time when he must feed himself, but maybe he has finished all the food I have prepared but we still need to feed him more.  With this product, the little guy gets to practice articulating those tiny fingers to pick things up and drop them in his mouth, as well as learn to chew on things in a way that is satisfying to the gums over the molars, which are starting to come in.  The magic thing I found are the Ella’s Kitchen “Puffits.” 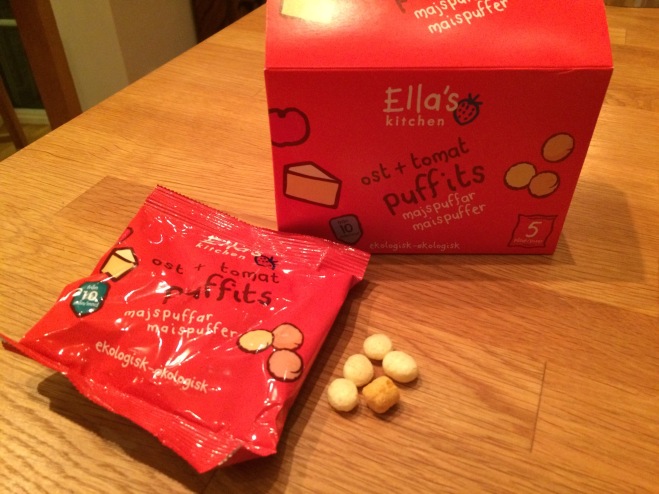 The “puffits” are sold in a box with 5 bags per box for around 30 kr (27 hkd, 3,50 usd).  I believe there are 2 flavors available in Sweden, one with fruity flavors (the little guy is boycotting sweet flavors, including all fruits at the moment), and the one you see in the photo, which is cheese and tomato.  You can also see the size of the little puffs.  They are perfectly sized because the little ones can’t choke on them, but they still understand you have to chew on them before you swallow them.  Also, unlike all the other “puff-like” chew things, the flavor on these is in the actual puff, not in a powder that makes the hands all messy.  Nicely done, Ella’s Kitchen.

Ella’s Kitchen has really become the brand for food that I trust for babies more than any other.  I think the story on the brand is that the creator of the company was an executive at Nickelodeon and then had a daughter (Ella) that he made some food for, and then the brand was born.  Everything they use is organic, and they do not use weird fillers or other “funny things” in the products.  Their puree’s are good, creative, organic, and usually the little guy likes them.  In Sweden they are a great price, around 10 kr (9 hkd, 1,25 usd) per pouch.  In Hong Kong they cost at least x2 this, so I have found myself hoarding them when we go back to Hong Kong.  It looks like now I have another thing by Ella’s Kitchen to hoard 😉