I am an American guy married to a Swedish woman, with a son who is along for the ride in our adventures. I am now on "Pappa Leave" (Pappaledig) taking care of our son - traveling between Sweden and Hong Kong, and everywhere in-between. The hope with this blog is to simply share about my experiences if they are interesting enough that I think someone might care to read about them. Maybe people will have a good resource to look to when they are researching online. New fathers might feel a sense of relief knowing the crazy bits they go thru are shared. At the very least, hopefully the readers of this blog will be entertained.
Follow A Father on Pappa Leave on WordPress.com

I’ve written about this before, but it’s worth writing about it again! Today we went to The Peak, probably considered the #1 thing to do if visiting Hong Kong.

To get there, there are a few options, but I am glad we took the bus up.  Bus number 15 leaves from the pier, and has a lot of stops on it’s way to the peak.  Cost is something like 9,80 hkd.  I have taken the Peak Tram up in the past, but the bus is cheaper and I think the views were better.  The tram has a lot of branches blocking the views, but if you sit on the upper level in the bus, you have amazing views of various parts of Hong Kong.  The bus also leaves every 7 minutes, so no stress on departure times.

Once we were up there I was concerned it would be packed because it was a holiday.  But nope, it was just fine.  Busy like you would expect, but not crazy.  We found the Pacific Coffee and enjoyed the view – one worth a million in my opinion.

We enjoyed the mall, which is surprisingly good, and then did a little bit of a walk around before we decided to walk down Old Peak Road.  This is one steep walk!  It was nice and fresh and we enjoyed it, but by the time we made it to the Midlevel Escalators, which were going up instead of down (they go down for the commuters in the morning, and up for the commuters in the evening), we were pretty tired.  All-in-all, it was a great day, even if my wife and I have been there many times before 🙂 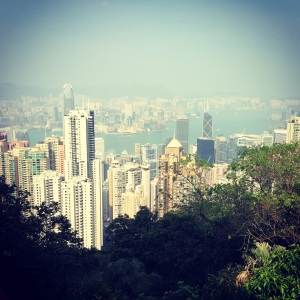